The Power of Three: Secrets of Success in a Family Business

by Tim, Tom and Paul Freeman, Save A Lot Retail Partners

As business partners, as well as brothers, we firmly subscribe to the theory that good things come in threes.

Growing up, it might have been hard to imagine that we’d someday make a life out of working together.  We grew up in Northern Michigan, with only 5 years separating us.  Like most brothers, we’d fall into a similar pattern: we’d fight, then get along, then fight again, and repeat the process about a million times.  But the three of us always managed to have a good time in the end.

And over the years, that number three keeps popping up in our lives.  We’re third generation grocers. Our grandfather started the first Glen’s Market in Gaylord Michigan back in the 1950s, and our father and uncle eventually joined the business as it grew to 23 stores (including some Save A Lot locations).  We all worked at stores, even after college – Tim was a district manager, Tom and Paul were store managers.

When our dad decided to sell the company, opportunity presented itself to the three of us.  We formed our own company (which eventually became the Freeman Family Group) and started by choosing to buy, yes, three Save A Lot stores from him back in June of 1999.

Since then, we’ve built our company into a successful group of 22 Save A Lot stores across Michigan.  It hasn’t always been easy (a note of advice: in your first store, you may regret your decision to save money by busting up a cement floor by yourself), and we’ve had our share of brotherly arguments along the way.  But we love what we do, and we’re proud of what we’ve built.  We love the fact that our Save A Lot stores provide an easy, clean and fast way for our neighborhood to feed their families with great quality and great value.

In keeping with the pattern, we can distill the secret of our success in three words: 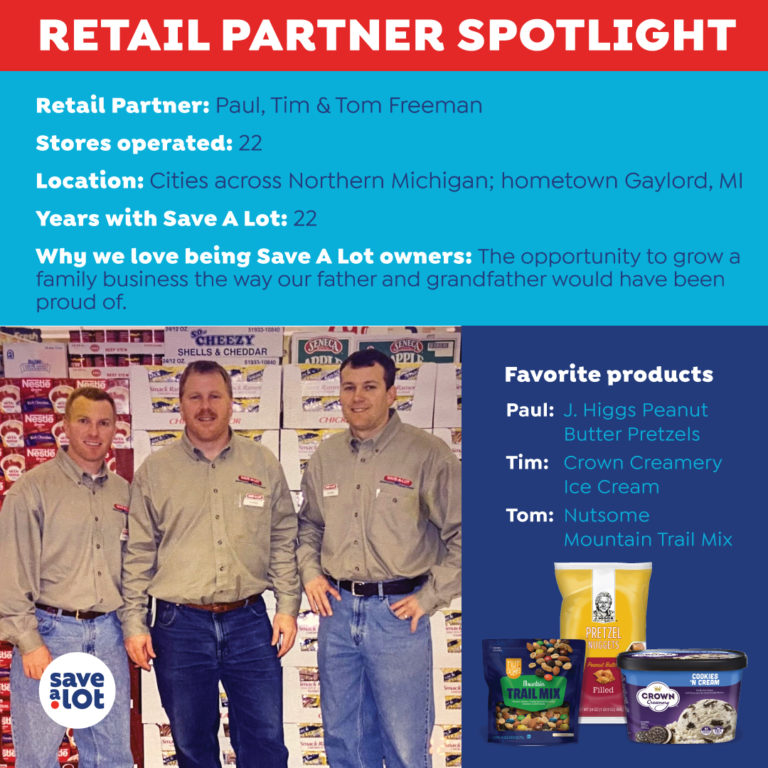 We’re often asked how three brothers can get along at work, and we always used to tell people the same thing: if you drive by our offices and see us in the parking lot wrestling, it just means we’re making a decision.  But honestly, the partnership has worked remarkably well over the years because of the confidence we have in each other. When our portfolio grew quickly (we were up to 10 stores within our first 5 years), we each gravitated towards the areas of the business in which we excel.  And as brothers, we trust each other to handle the issues within each given area, and bring the trio together when needed.  It’s a system that lets us all stay involved, and it works because of the trust and confidence we have in each other.

With the team that Save A Lot’s CEO, Kenneth McGrath, has developed corporately, our confidence in the brand has grown in recent years.  They’re making the retail partner process simpler and easier to navigate, providing a simple and smart corporate format while letting owners like ourselves make the changes we need to make our stores successful locally.

Your stores are only as good as your employees, and the biggest lesson we learned from our grandfather and father was the importance of creating a positive company culture.  We treat our employees like family, quick to give hugs and high fives when we see them, ask about their families, and invest in them as people.  How you treat people is just as important as the bottom line, and we work hard to instill that mentality in each of our stores. The benefits are tangible too: turnover is very low for managers and assistant managers (one of our managers has been with us for more than 20 years), and we know that’s attributed to the culture we’ve created.

That culture inspires our team to treat customers with similar respect and a helpful hand.  When a customer asks for a product, we tell our associates to do more than just point to the aisle; take the extra step and bring them straight to the item. We know that consumers can shop with anyone, but they choose our Save A Lot stores because we treat them that way.   That’s our culture at work.  Treat your customers and your employees like they were your brother (without the wrestling, of course).

And to truly help the customer, you’ve got to help the neighborhood they call home. We ask each of our stores to partner with local food pantries and schools to help those in need, and let them localize their philanthropy to try to make a real difference.  We also became deeply involved in Save A Lot’s national food donation drive called Bags for A Brighter Holiday, selling bags of food for donation and making monetary donations directly to local charities.  Our store in Traverse City sold more bags than any Save A Lot store in the country, donating thousands of bags and a meaningful donation to a local pantry that was overwhelmed by the support.  We’re so proud of that team for rallying to the cause, and we hope that sense of service permeates throughout our entire network.

Confidence, Culture and Community: those are the three c’s that have helped move our business forward.  And with several of our children now working with us, we may soon need to offer a fourth: Continuity.  We’d be proud to keep our Save A Lot success in the family for years to come.

Tim Freeman is President, Tom Freeman is Vice President of Operations, and Paul Freeman is Chief Financial Officer for Freeman Family Enterprises, a network of 22 Save A Lot locations across northern Michigan.